The first time I told my husband I had signed up for the training, he did not like the idea. But he changed his mind when he visited one of our group sessions during the ICT Training

Susana Amable, 34 years, says this while stooping to pick up her 3-year old daughter, Precious Aidoo

A beneficiary of the European Union-funded, Sustainable Livelihoods and Transparent Local Authorities (SLATLA) Project’s Information and Communications Technology (ICT) training, Susana successfully completed a three-month training in computer software and just received her certificate, along with 60 other beneficiaries, as well as an ICT Starter Tool-Kit to help her begin her own business.

I have three children with one becoming a teenager soon and like all children, they like technology. They always try to play with either my phone or my husband’s, besides their own computer toys. So, when I heard about this project from the Assembly, I quickly volunteered because I wanted to understand how computers work and how to fix them.

Implemented by ActionAid in collaboration with two district assemblies in the Greater Accra and Brong Ahafo regions; La Nkwantanang-Madina Municipal Assembly (LaNMMA), and the Sunyani West District Assembly (SWDA) respectively, SLATLA is a three-and-half year initiative aimed at promoting growth of the informal economy and improving mobilisation of revenue, accountability and transparency in these two assemblies by providing skills training in agribusiness (mushroom, grasscutter and vegetable farming), artisanal training (tiling, plumbing, embroidery, and plastic waste recycling) as well as ICT skills to women, Persons Living with Disabilities (PLWDs) and youth.

Divided into groups consisting of four members, Susana says her group has a good collaborative business plan in place.

My group is made up of two women and two men and during the training, we came up with a plan to ensure we make effective use of the ICT Tool-kits provided to us. I am a hairdresser and have a kiosk and so we have decided that we will use my kiosk to advertise our skills and services and split the profit evenly whenever we get a job.

To Susana, SLATLA has been very impactful in her life

Before, I had no idea how computers work, much more how to fix them but now, after the training at NIIT, I understand the basics and I know how to fix it when the system is broken. SLATLA made that possible.

Susana and some of her group members, receive their European Union-funded toolkit from the Municipal Chief Executive of the Madina Assembly, Jennifer Dede Afagbedzi
Deborah Smallie Lomotey
ABOUT THE AUTHOR 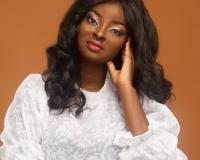